Goa traditionally had the Black & Yellow Taxis and later we saw White Coloured Tourist Taxis and Finally Taxis in all colours with a Tourist Taxi Symbol. 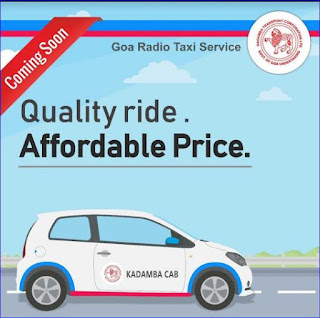 Taxis in Goa have been in the news for all the wrong reasons including resistance to install speed governors, Fare meters and have been accused of forming a Taxi Lobby denying entry to playeres like Ola & Uber.

Stayed tuned for updated info on The Kadamba Taxi Service ! 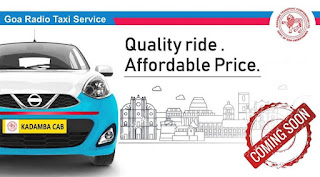 Cars such as Toyota Etios, Maruti Omni, Mahindra Logan, Tata Indica and Tata Indigo are fairly popular among taxicab operators. The livery of the taxicabs in India varies from state to state. In Delhi and Maharashtra, most taxicabs have yellow-black livery while in West Bengal, taxis have yellow livery. Private taxicab operators are not required to have a specific livery. However, they are required by law to be registered as commercial vehicles.

According to Government of India regulations, all taxicabs are required to have a fare-meter installed. However, enforcement by authorities is lax and many cabs operate either without fare-meter or with defunct ones. In such cases, fare is decided by bargaining between the customer and the driver. Taxicabs face stiff competition from auto rickshaws, but in some cities, for example Mumbai, auto-rickshaws are banned in the main city district, thus giving taxicabs a monopoly.